South Pacific Distillery was incorporated November of 1982, in Queenstown, New Zealand. Established in Kelvin Heights, in somewhat humble beginnings, this being a converted garage.

The first seven years were dedicated to research and experimentation, until the products were to the exact taste, colour, and consistency, which now deserve the "Roaring Forties" label.

In 1997, Nelson was chosen as the ideal location, and with the purchase of the historic Anchor Shipping & Foundry Co. Ltd. building, the company began its expansion program.

To compliment this, a large grain distillery, designed and built by Jacob Carl of Germany, has also been installed. A bottling plant, which will fill, cap, and label up to 3,000 bottles per hour, is also on premise. 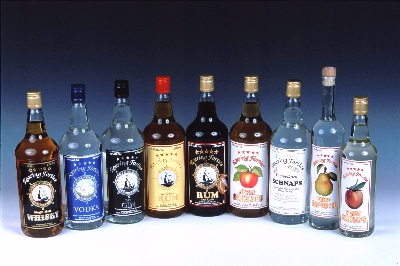 All Roaring Forties Products are made from 100% cane or grain, and have no preservatives, chemicals or artificial flavours added.

Absolutely no whey alcohol is used in the production of any of our spirits.

Our methods are all of a traditional nature, which produce a high quality spirit, fit for the "Roaring Forties" label.

All aged products are stored in oak casks for flavour and maturation.

South Pacific Distillery is proud to announce, that its Rum, Roaring Forties 40%, Oak Aged Rum, has been awarded a Bronze Medal, at the RumFest 2000, which was held in Barbados, B.W.I.

This was the 11th Annual Rum Taste Test with 161 rums taste-tested by 41 judges, over a period of 5 days. The rums were from around the world, with most from South America, and islands throughout the Caribbean.

As New Zealand's only commercial Rum distiller, this would be the first medal ever awarded to a New Zealand rum.

For orders or info, please email us.